Majdalani Briefs the UNSC on Urgent Need to Achieve Water Security in Palestine, 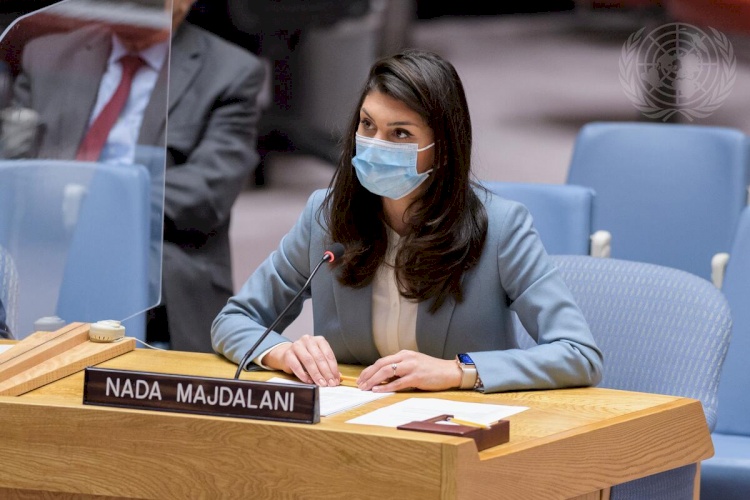 When addressing the United Nations Security Council (UNSC) last week, for the 2nd time in less than 3 years, EcoPeace Middle East called for water cooperation, as a matter of urgency, in the face of a looming climate crisis.

At the invitation of the Norwegian Presidency to the UNSC, EcoPeace Palestinian Director, Nada Majdalani, presented the organization’s bold initiative calling for a Green Blue Deal (GBD) for the Middle East as a roadmap for advancing climate security and peace in the region.

Ms. Majdalani painted a devastating picture of the daily realities in Gaza - “Water shortages, dark long cold nights without electricity or fuel, wars and close to 15 years of blockade, resulting in fragile medical and food security. Adding to this now, the catastrophes of climate change…. affecting the lives of 2 million people.”

Majdalani stressed the need to achieve water security in Palestine, especially in areas classified as "C", where the occupation impedes access to water resources. She also presented to the United Nations Council the challenge faced by the Palestinians to obtain water in the summer, stressing that Palestinian Families suffer from water scarcity and needs to reduce their daily water consumption and buy water at a cost that is two or more times more than the water provided by municipalities, in order to meet their daily needs.

During her visit to New York, EcoPalestine / EcoPeace Middle East Director-General Nada Majdalani met with the Minister of Foreign Affairs of Norway, Anken Hoetfeldt, where they discussed the Blue-Green Deal for the Middle East that will transform the region into a positive and recognized model for climate diplomacy and cooperation through Exchange of renewable energy and water.

Majdalani stressed that this deal addresses Palestinian water rights and will allow Palestinian families to obtain water at no additional cost.

She called on all international partners to devote efforts to achieving water justice in Water distribution for the Palestinians. Specifically, EcoPeace requested:

- the Security Council and relevant UN agencies embrace a climate resilience perspective and prioritize Israeli Palestinian climate security by calling on the parties to agree on new arrangements for natural water allocation and pollution control.

- invited foreign ministers to follow the lead of the Foreign Minister of Finland, HE Pekka Haavisto, and help create a ‘coalition of the willing to advance a GBD of climate resilience in the Middle East.

- called on the Eastern Mediterranean Gas Forum to widen its mandate to include renewable energy and climate concerns, in order to be a primary vehicle to advance climate security in our region.

- called on the Security Council to recognize globally that climate change is a “threat to peace” within the meaning of Article 39 of the UN Charter.