In Palestine in general, and the governorate of Hebron specifically, women are responsible for managing the water and sanitation, as well as the health of the household.
Water scarcity is one of the most prominent problems facing Palestinian women in the areas of Dura, Masafer Yatta, and Al-Fawwar camp, particularly in the summer season. The rates of water use and the per capita share between the city, village, camp and marginalized gatherings in the Hebron governorate seem unequal, as the per capita consumption of water is unequal.

The areas of Masafer Yatta, Dura, and Al-Fawwar camp, in addition to the old city of Hebron, suffer from a lack of sewage networks, as the family relies to a very large extent on cesspits, which are often small in size, in addition to the fact that the water drainage channels in public streets are closed, which leads make it worse; Where sewage accumulates and carries health hazards in public roads, it contributes to the spread of microbes and pathogens, which negatively affects the health of the population in general, and women and children in particular.

In marginalized communities (village and Bedouin) females suffer from the lack of toilets and other health facilities, as many women often have to walk outside the house to go to the toilet, considering the lack of privacy, in addition to using unclean water to clean themselves after using the toilet, especially during the menstrual cycle, and this negatively affects the health of women in general. 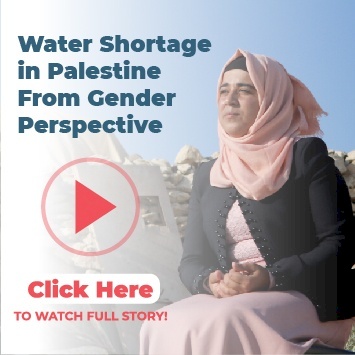